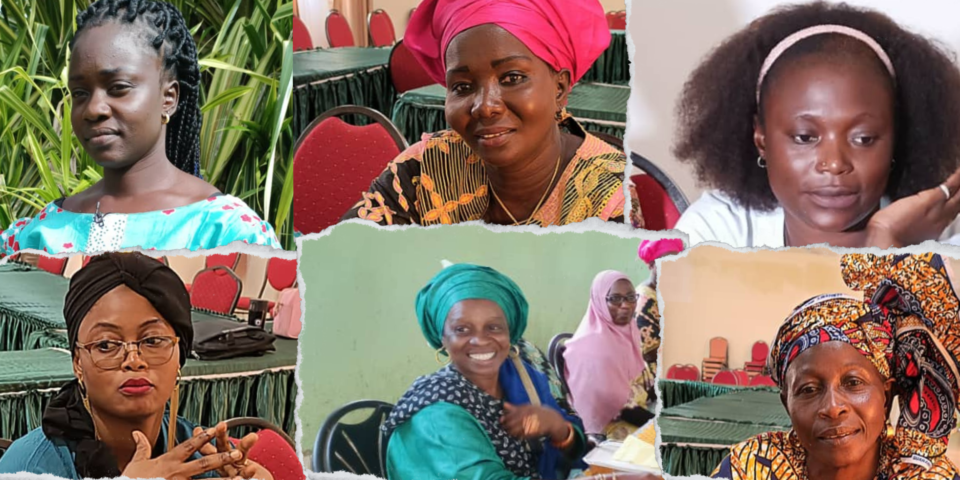 The project 99 WOMEN SENEGAL was born from the collaboration of two associations ENTREPRENEURS DU MONDE and THE 99 PROJECT, each of them participating in the empowerment of women. It is an original program combining artistic creation and self-entrepreneurship to make visible the rural women entrepreneurs supported by Entrepreneurs du Monde in Senegal.

The Phase 1 of the project (July -September 2022) is completed

Making women visible means first of all giving them a voice. Since July 2022, the testimonies of 70 women have been collected in the field, by the association’s facilitators in 4 villages of Casamance. During these meetings, the women talked about their professional and personal experiences, their pride, their dreams and the obstacles they encountered on their path to emancipation and the changes they aspire to. Telling and sharing a story with other women is not a usual thing and these encounters have often been moments of laughter and tears. Aïssatou BALDE, project manager 99 women in Casamance tells about the collection of women’s testimonies.

Aissatou Balde is a 27-year-old Senegalese woman. After studying at the Ecole Supérieure d’Economie Appliquée (Community development and training), she turned to educational mediation. Based in Ziguinchor, in Casamance, she is now responsible for support, gender referent within Entrepreneurs du Monde and lead of the project 99 women !

From testimonials to theater monologues, rewriting as an encounter between urban women and rural women

The Phase 2 of the project (September -December 2022) is launched

These life stories will now serve as the basis for the writing of a multilingual theater piece with 99 voices in cooperation with groups of urban women. This original creative device makes it possible to engage a group of women in a collective experience of transformation. Making women’s voices heard, making them visible in their communities and beyond, promoting the extension of their personal and professional networks are all levers for recognizing the work force, know-how, creativity, Senegalese women to contribute to the prosperity of the country and to make it evolve with men.

From September, several writing groups in French or Wolof will be created in Ziguinchor and Dakar to transform the testimonies collected into theatrical monologues. If you want to participate or know more about this activity, do not hesitate to contact us.

99 Women Senegal is also a documentary film that traces the collective and individual adventure of these women and the teams that support them. Collective workshops and individual portraits of women are being filmed with Dame Diallo directing. Four women were chosen to produce images in their workplaces, with their families and in their interactions with the support teams of Entrepreneurs du Monde. They come from Ziguinchor, Bignona, Goudomp and Kafoutine, the four municipalities taking part in the project and have various occupations: trade, market gardening or rice growing.

Aissatou Balde is a 27-year-old Senegalese woman. After studying at the Ecole Supérieure d’Economie Appliquée (Community development and training), she turned to educational mediation. She has completed numerous internships in rural Senegal around issues such as community and territorial development or the involvement of women.

Working for different NGOs, she became interested in difficult and often taboo societal subjects: the sustainability of the practice of female genital mutilation and the role played by the grandmother in the communities in the perpetuation of the early marriage of girls, the subject of her thesis.

In 2018, Entrepreneurs du Monde (EdM) offered her a long-term internship as a support officer. Based in Ziguinchor, Casamance, she is now a full-time EdM employee and head of the 99 Women!

Hello Aïssatou, before working for Entrepreneurs du monde, what was your contact with the rural world?

Virtually none. I was born in Dakar and had never left Dakar before my internships; the only rural people I knew were those who came to my parents in our suburban neighborhood in Dakar (Keur Massar). I realized that their life was difficult: they walked for miles, they lacked medical care and sanitation. I could see that they maintained practices based on traditional beliefs. These observations prompted me to take an interest in health and well-being issues, in particular female genital mutilation.

The prevalence of female genital mutilation

According to the study conducted by the National Agency for Statistics and Demography (ANSD) of Senegal in 2016, 23% of women aged 15-49 said they had been circumcised. It is among Muslims, in the South and North, and among the Poular, Mandingo, Diola and Soninke ethnic groups that excision is most frequently practiced. Circumcision is usually performed before the age of five. The majority of women (81%) and men (68%) believe that female circumcision is not a practice required by religion. In the majority of cases, women and men are not in favor of maintaining this practice (80% in both cases).

Within EDM, what are your responsibilities?

I am in charge of support, gender referent for LIGODEN and MURICASA, two EDM structures here and in charge of partnerships for LIGODEN*. I was also led to work within the framework of a partnership with EDM on a project of the French Office for Immigration and Integration with beneficiaries who had returned from migration and who wished to reintegrate into the Senegalese society; it was about understanding their backgrounds, their motivations, their skills and then advancing their project and also helping them to overcome the complex of returning. It should be noted, however, that the majority of young people I have met who leave Senegal do so to study and then return to work in the country.

*MURICASA and LIGODEN are programs supported by Entrepreneurs du Monde in Senegal. MURICASA is a training company in the transformation of agricultural products. LIGODEN is a support program for the creation of VSEs and professional integration.

You facilitated the verbatim collection workshops for the project 99 women; What did you take away?

This was a very strong moment because women are not used to being asked questions about their life, about who they are (a questionnaire is proposed to invite people to speak and discuss) Women were able to talk about how they feel, to chat with each other, to laugh and cry together and finally to break free. They were very happy with this sharing and eager to see the next steps. They even suggested that we organize this kind of sharing every two or three months so that they could free themselves by sharing their experiences.

A woman’s story marked me. After years of marriage, she remained childless and had six miscarriages. Pregnant, her parents plotted with the village elders and youth for a purification ritual. Her mother woke her early in the morning, making her believe that they were going to go to another village to see a healer to ensure the smooth running of the pregnancy. But along the way, they stopped in the bush and before she understood what was happening to her, two big Kankurang came towards her and beat her, not to hurt her for the proper conduct of the ritual. . After spending a night in the bush, they took her back to her native village. At the entrance of the village, the inhabitants were waiting for her with songs and dances and accompanied her to her home. The day she was due to give birth, the young people and the Kakurangs accompanied her to the hospital and then after the delivery, they drove her back to her home, to the sound of drums. Her son is the only child who survived and he is 23 years old today.

For me, rubbing shoulders with rural women means discovering traditional practices and beliefs that vary according to ethnicity and locality and which I did not know existed.

What do you think of the women you interviewed?

We must first salute their bravery. They work hard to succeed; we must provide them with financial and social assistance and also put them in touch with women from other regions to develop mutual aid and make them visible.

The Kankurang is an initiation rite practiced in the Mandinka provinces of Senegal and Gambia, corresponding to Casamance, and in the city of Mbour. According to tradition, the Kankurang would come from the Komo, a secret society of hunters whose organization and esoteric practices contributed to the emergence of the Mandingos.

The central character of the Kankurang is an initiate who wears a mask made of the bark and red fibers of a tree called faara; it is dressed in leaves and its body is painted with vegetable dyes. It is associated with circumcision ceremonies and initiation rites. Its appearance is marked by a series of ritual stages: the designation of the initiate who will wear the mask and its investiture by the elders, its retreat into the forest with the initiates, the vigils and processions in the hamlet of the new initiates. These rites usually take place between the months of August and September. The Kankurang parades always surrounded by former initiates and villagers who respectfully follow its actions and accompany it with their songs and dances. Their appearances are punctuated by a jerky dance that it performs while wielding two machetes and uttering shrill cries. Its followers, armed with sticks and rônier leaves, mark the rhythm with their refrains and drums.

The Kankurang is both the guarantor of order and justice, and the exorcist of evil spirits. As such, it ensures the transmission and teaching of a complex set of know-how and practices that constitute the foundation of Mandinka cultural identity. This ritual, which has spread to other communities and groups in the region, is an opportunity for circumcised young people to learn the rules of behavior that guarantee group cohesion, the secrets of plants and their medicinal properties. or hunting techniques.