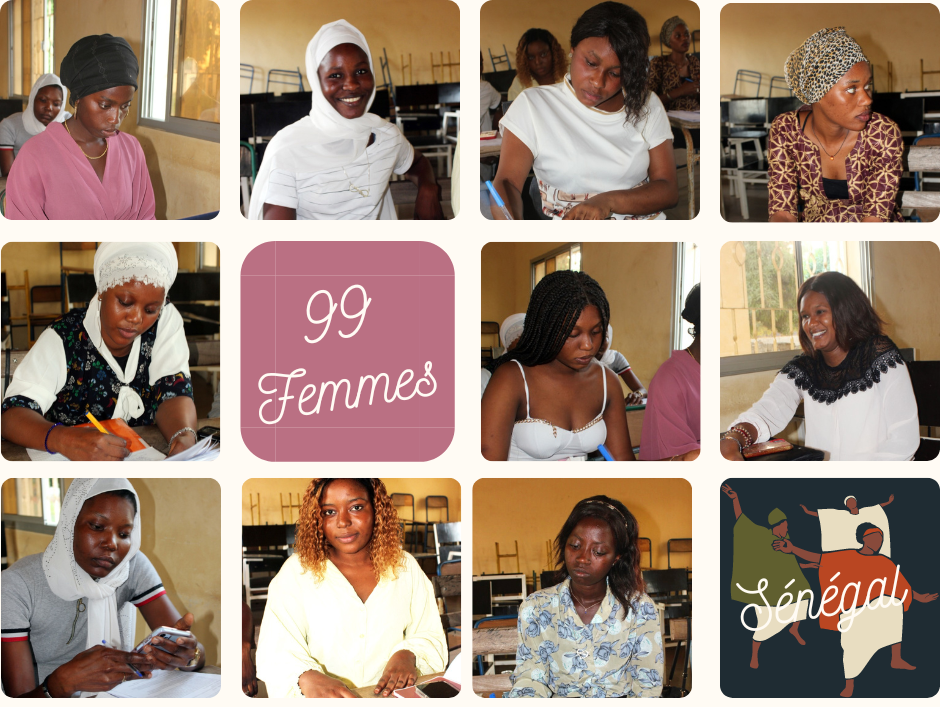 The writing phase (Phase 2) of the project is complete!

After collecting testimonials from 70 rural women entrepreneurs supported by Entrepreneurs du Monde in Senegal (Phase 1), groups of women from the cities of Ziguinchor and Dakar transformed these stories into theatrical monologues.

The project 99 WOMEN SENEGAL was born from the collaboration of two associations ENTREPRENEURS DU MONDE and THE 99 PROJECT, both supporting  women empowerment from different perspectives. It is an original program combining  art creation and entrepreneurship to make visible the rural women entrepreneurs supported by Entrepreneurs du Monde in Senegal.

The project has received support from Axa Senegal and the Anber Foundation.

Safy Diedhiou led four writing workshops with young women, students of the University of Ziguinchor. She answered our questions.

Hello Safy, could you tell us about yourself?

I am a business law student in Ziguinchor. My lawyer father is at the origin of my orientation but my arrival in Ziguinchor was dictated by Senegal’s desire to mix and decentralize students from different regions of the country. At first I was not thrilled to land in Ziguinchor. But I found a warm welcome there and also a cheaper life and easier transportation than in Dakar. My departure for Casamance also allowed me to get closer to my grandparents (my family is from Kagnobon) and Diola, my mother tongue, obviously facilitated my integration. I have many interests but I particularly like taekwondo and cinema. I am the president of the university cinema club and I organize screenings, debates with directors but also short film shootings ; a film that meant a lot to me is Le Mandat by Senegalese director Oussemane Sembene.

How did you hear about the 99 FEMMES SENEGAL project? What do you take away from your experience?

I heard about The 99 Project from the movie club. I facilitated the writing group and also wrote monologues; this experience gave us the opportunity to get to know each other through writing, to work in symbiosis, in love really. I thus discovered the other participants of the workshop through their writings and I understood them better. I’m also very proud that we managed to do this writing work on our own, which we didn’t know about at the start. I found it beautiful to work together.

Today, women are aware of their value and nothing can stop them. I recognize myself in their bravery, determination and hard work. Like them, I know why I am here.

Is there a story that struck you?

The testimonial of Rokhaya from Bignona really struck me. She expresses her regret at leaving school after becoming pregnant at 16 under pressure from her uncle. This showed me the very important role of parents in the destiny of girls. I measure how things have been different for me. I was lucky to have a father who accompanied me in all my activities. I was educated. I was not forced, I was able to take responsibility. In the past, women did not have the courage to defy social norms. Today, this has changed: women know their value and nothing can stop them. I recognize myself in their bravery, determination and hard work. Like them, I know why I am here.

The story of Rokhaya de Bignona

“I really liked school. I stopped my studies in 5th grade in college because I got pregnant. I was only 16. I wanted to continue but my paternal uncle pushed me to give up. school, he said that I could no longer stay in his house with my pregnancy. He took me to the father of the child where I stayed until I gave birth. My mother was against this decision but she did not There was nothing she could do because since her divorce from my father, she had entrusted me to my uncle. During all this moment of pregnancy, it was my mother who took care of me because my husband did not have the means. , I went back to my uncle who formalized my marriage with the father of my child. I can say that this marriage was imposed on me, because I was not ready to get married. What I wanted was to study. I told my uncle that the pregnancy was a mistake but he didn’t believe me. That’s how I got married and left school permanently.”

What are your future fights?

I would like to help those who lack the means to support themselves by creating employment. Industries are insufficient in Senegal and the problem of unemployment pushes too many young people to risk their lives in dangerous migrations. I lost one of my cousins like that. He went to Morocco and we never found his body; many young people want to leave but the country cannot work without them.

Many young people want to leave but the country cannot work without them.

International emigration is mainly characterized by flows directed towards West Africa (Mauritania, Gambia, Ivory Coast, Mali), Central Africa (Gabon, Congo) and North Africa (Morocco). and flows directed towards the industrialized countries of Europe and North America. Emigration flows from Senegal to OECD countries have increased sharply since the early 2000s, rising from 9,700 annual entries in 2000 to nearly 20,000 in 2010 and 23,500 in 2019. Spain, followed by Italy and France are the top three destination countries in the OECD for Senegalese nationals. Intentions to emigrate are particularly high among young people (52%) and the unemployed (50%). According to the NGO Caminando Fronteras, more than 11,000 people died between 2018 and 2022 in their attempt to reach Spain from the African continent. That’s six a day.